Is located on the corner of Church and Allegheny Streets at the Old Dauphin School House in the Borough of Dauphin.  It is a non-profit organization with all volunteer staff and committees, formed in 1996 by members of the community.

EVENTS
250th Anniversary
****Due to the fire in the Old Schoolhouse, this month's meeting will be held at Zion Lutheran Church at the corner of Swatara & Allegheny Streets in Dauphin. The meeting will begin at 7pm as normal. We hope to see you there!****
October's Speaker is Major Robert Einsel (PSP Retired). He will be presenting a program titled
​"The Origins & Evolution of the PA State Police: 1905-1937"

Forms for Hometown Hero Banners, 250th Logo Shirts, Time Capsule submissions, and Sponsorship Banners for your business, group or family can be found on the 250th Anniversary page...just click the button above!​
From the Rivers to the Valleys...
Dauphin-Middle Paxton Historical Society collects history covering the lands of Dauphin Borough and communities in Middle Paxton Township, along with the three valleys of Clarks, Stoney and Fishing Creek.  Within the township and to both the north and east is the southern most tip of the Anthracite Coal Region in Pennsylvania.  The Dauphin & Susquehanna Coal Company, which at one time owned much of Dauphin and Middle Paxton Township, constructed a railroad during the 1850's to connect the coal mines to the outside world.  Bordering Middle Paxton Township and Dauphin Borough to the west is the Susquehanna River which was once home to the Pennsylvania Canal and caused Dauphin to prosper before the railroads came.  Throughout its early history, Dauphin was a transportation hub, home to not only the Pennsylvania Canal, but the Schuylkill & Susquehanna Railroad, the Pennsylvania Railroad (eventually Penn Central, Conrail and Norfolk Southern), Northern Central Railroad and the Reading Railroad. 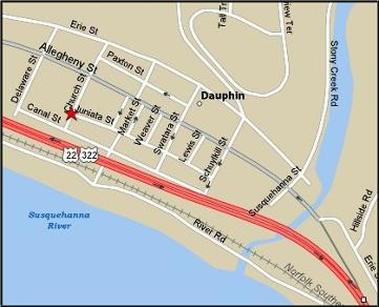 From the North
Dauphin is off interstate 22/322.  Take the Route 225 North exit for Dauphin/Halifax.  Turn right onto Allegheny Street and then another right onto Church Street before the center median begins.  Parking is behind the old school.

From the South
Dauphin is off interstate 22/322.  Take the Dauphin Boro/Stony Creek exit.  Head north on Allegheny Street until the center median and street lights end.  Turn left onto Church Street.  Parking is behind the old school.
Hours of Operation
4th Thursday the Museum opens at 6:00 p.m.
The Monthly Meeting starts at 7:00 p.m.  (except July, August, November & December)
Check our Facebook page & website for upcoming programs!